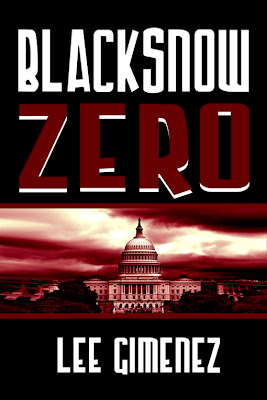 Meet author Lee Gimenez Saturday February 16 (tomorrow)
at the Atlanta Writers Club book fair.
The event is being held at the Georgia Perimeter College in Dunwoody, Georgia (10:30 am - 12:30 pm).

We are pleased to have Lee Gimenez back for another visit with Book Talk. See his May 2012 post

While investigating the murder of a prominent Senator, FBI Agent Erica Blake uncovers a drastic, top-secret operation. A group of rogue American generals are planning a ruthless attack on China, as a way to free the U.S. from the crushing debt the country owes the Chinese. Named Operation BlackSnow, the plan will be carried out without the knowledge of Congress or the public. Realizing the attack could plunge the U.S. into a world war, Erica tries to stop it.

Beautiful and smart, Erica is also a maverick, her lone-wolf approach usually putting her at odds with her own agency. Suspecting involvement by the FBI Director in BlackSnow, she enlists the help of her ex-lover, CIA Agent Steve McCord. Not knowing who to trust, Erica and Steve battle deadly black ops assassins, corrupt Senators, and their own complicit agencies in their attempt to stop BlackSnow. Do they succeed, or is the planet plunged into a world war?

What They Are Saying About Blacksnow Zero:

'An action-packed thriller. Plot twists and turns kept me guessing until the very end.'

'I discovered Lee Gimenez's work via his Science Fiction / Space Opera (Death On Zanath), which is what I normally read, but his mainstream Thriller is another fantastic piece of work!'


'This is a zippy political thriller that has it all - violence, sex, intrigue and huge explosions. I couldn't put it down and was sorry when it ended.'

Lee Gimenez is the bestselling author of seven books and over fifty short stories. His latest novel, BLACKSNOW ZERO, was published by Double Dragon Press in Jan 2013. Four of his previous novels became ebook bestsellers. They are: THE NANOTECH MURDERS, DEATH ON ZANATH, VIRTUAL THOUGHTSTREAM, and AZUL 7. His novel TERRALUS 4 was produced into an Audiobook. THE TOMORROW SOLUTION is his collection of short stories.
His books are available at Amazon, Barnes & Noble, the Apple Store, Books-A-Million, Books In Motion, Mobipocket, Amazon UK (England), Flipkart (India), Amazon CA (Canada), Booku (Australia), IBS (Italy), Amazon JP (Japan), Peerless, and many other retailers.  Lee lives with his wife in the Atlanta, Georgia area.

Posted by Barbara Barth at 7:30 PM