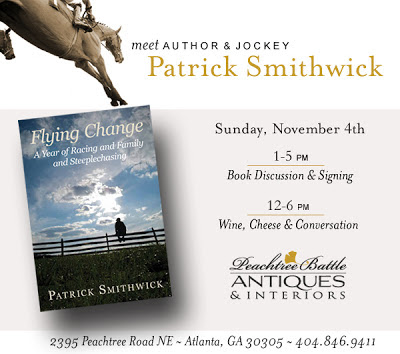 Don't Miss This Peachtree Battle Antiques & Interiors Event if you are in the Atlanta area!
Meet author & Jockey Patrick Smithwick on Sun. Nov.4th
Books are available for sale at this event!


About the Book from Amazon:

Patrick Smithwick has done it again. His new book Flying Change is every bit the sleek, well-bred and fast Thoroughbred as its predecessor,Racing My Father.
In Flying Change, Smithwick is no longer racing his father. He is racing himself - while continuing with his duties as a father, a husband, a friend, a teacher and a writer.

This memoir of dueling ambitions is the tale of a man who decides in mid-life to call off all restraints, silence all naysayers, put his mind and body and courage to the test, and do what in his case--he has been away from the world of racing for twenty-five years--is the impossible: within a nine-month period get a horse to ride in the most difficult steeplechase race in the world, and then, ride that horse as if his life depends on it, which, literally, it does.
Flying Change is an inspiration for anyone who thought he or she could never compete again.  If you'd like to know what it's like to be a member of the elite racing set, if you'd like to experience firsthand a foxhunt at its most exciting moments, if you'd like to vicariously ride in the Maryland Hunt Cup, then this is your book.
The demands in time and energy required by Smithwick's return to racing pull him away from his family and his ambition to write, creating major conflicts. Yet, the fast-paced narrative shows Smithwick striving to carry on traditions from his upbringing and apply them to the raising of his own three children. These sections are positive, upbeat, father-affirming.  Fatherhood--the tensions, the responsibilities, the possibilities--is a topic sorely missing in the American canon. When tackled in American literature, books dealing with fatherhood are most often ones written by a son or daughter describing his or her mistreatment by father who is often either abusive, violent, alcoholic, inattentive, or worse. Smithwick fights against that formula in Racing My Father, a memoir of growing up as the son of A. P. "Paddy" Smithwick, the legendary steeplechase jockey.
In Flying Change, Smithwick goes against the grain again. He writes, as a father of three children, about his relationships with them. He addresses the question of what it means to be a father in 21 Century America. Tragedy on the racetrack in the form of death, paralysis, and suicide lurks in the background. This realistic recreation of the world of Thoroughbred racing gives the book a seriousness, and it also creates suspense.
Flying Change is a must-read for the general audience as well as lovers of the horse and of horse racing. This is not only a racing memoir that catapults the reader through time and space at a breathtaking pace, it is a literary memoir that examines the big questions of how to live one's life.
From the Author's Amazon page:

Patrick Smithwick has been working with horses all of his life. At a very young age he began working with his father, the legendary steeplechase jockey, A.P. Smithwick, who became a trainer after retiring from riding. Smithwick then worked his way through school and college by exercising Thoroughbreds at major East Coast racetracks and riding steeplechase races at such venues as Belmont Park and Saratoga Race Course, and hunt meets such as the Maryland Hunt Club and the Grand National.
Smithwick received a Bachelor or Arts from Johns Hopkins University in 1973 followed by a Master of Arts in creative writing from Hollins College in 1975. After working in the newspaper business for several years, Smithwick began teaching English, philosophy, photography, and journalism at both the high school and collegiate levels. In 1988, he received a master of liberal arts from Johns Hopkins University and in 2000 he received his degree in education for ministry from University of the South. During this time, Smithwick taught as well as held the position of director of publications and public relations at two different schools.
He has now turned his two biggest passions into two business - writing and training. Thoroughbred steeplechase horse and riding. He also gives talks, teaches part-time, and does freelance writing.

Visit the Book Website!
Posted by Barbara Barth at 9:24 AM