This book review is part of the author's blog tour with WOW-Women On Writing . Click here to visit Women On Writing for an interview with the author and a list of the different blogs that feature Sonia Korn-Grimani this month, along with many special features, including a sample of her music.

“Sonia's Song” is a memoir that will draw you in from the first sentence, I stand three feet six inches tall when I am declared an enemy of the German State, and keep you memorized until the last page. I was not convinced I would like this book when I signed on to do a review as part of the author's blog tour with Women On Writing (WOW) but I wanted to read it since I am a fan of memoir writing. I could not put the book down.
The author's writing style makes the book easy to read with it's sharp dialog and tight descriptions. The subject is heart-wrenching, but beautifully and simply written. It is a small memoir, at 185 pages, with an additional four pages of photographs at the end. The book is also filled with photographs, which gives the reader a strong connection to the author and her family, as we see them as we read about them. I loved that about this book.
My attention was focused on her years at the orphanage 'Le Joli Coin', where she and other children hide in plain sight as Catholic orphans. It is there her talent as a singer begins to emerge.
“Singing daily in the choir offers me a sense of belonging that I need desperately. When I sing, I feel like I can reach God. This gives me a semblance of power – that I can beseech God in this way not t be ferocious toward the Jews. And, as the voices of our group harmonize, I don't feel so alone or scared.”
Life at the orphanage is not easy, and Madame J., who inherited and runs 'Le Joli Coin', is a questionable character at best. The children went hungry, she was not a nurturing woman, but lives were saved. The author meets up with her again in 1961 and questions if she has mellowed after all these years.
While robbed of a normal childhood, and faced with fear and horror, Sonia and her family survive to be reunited again. Their story does not end with the end of the War. Five years later the family still lives in limbo, and moves to Australia in the 1950s.
Sonia's courtship with John, her future husband, lasts three years, until they finally decide to marry despite protests from parents. Her own children have the life she missed.
The are four sections to the book, each a Verse, as in a song. Beautifully written and unforgettable, the author has shared her story of survival and hope, as well as a history of a period of time before, during, and after the Holocaust. 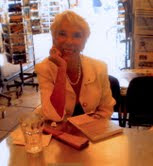 Sonia Korn-Grimani earned her doctorate in French literature and the teaching of foreign languages, and directed a multi-cultural language program at UNESCO. With her husband John, and their children Anthony and Renee, Sonia traveled and lived all over the world. She taught foreign languages at the university level, and performed frequently to the delight of audiences worldwide. In her album Cantos al Amor, Sonia sings in 16 languages.
In 1989, Dr. Korn-Grimani was knighted Chevalier dans l’Ordre des Palmes
Académiques, and in 1996 she was decorated Officier des Palmes Académiques.These decorations were awarded in recognition of her lifelong dedication to and promotion of French culture and language.
Sonia continues to sing regularly at UNESCO events in France, and is
also frequently invited to share her Holocaust experiences as a guest speaker in high schools, universities, synagogues and churches.


In Troubled Times, a Song of Hope.
At the age of seven, during Hitler's rise to power, Sonia Korn-Grimani was officially declared an enemy of the German State. After a perilous escape to the Belgian border, she witnessed the chaos and carnage of the Battle of Belgium. She lived with her family in the shadows, fleeing and hiding from persecution until being placed in an orphanage. There she lived with more than twenty other Jewish children, all disguised as a Catholic orphans, and all kept near starvation.
Sonia forged triumph out from these tragedies with unshakable tenacity and beguiling charm, a life chronicled in the new book Sonia's Song. She sang to the delight of audiences throughout the world, became an international sensation of radio and television, tutored French to a Queen, and was named a Chevalier by the French Government.
Sonia's Song follows this remarkable woman's transformation, starting from her childhood in Germany and Belgium in the 1930's and 40's, continuing post-war to Australia and Malaysia, and touching on her life in modern France and the Americas.

Posted by Barbara Barth at 3:56 AM