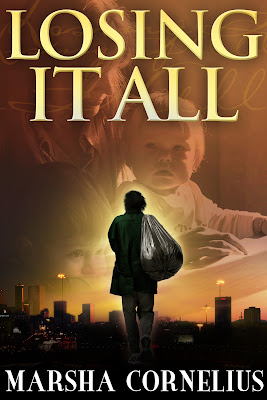 This week you can read Marsha Cornelius' new book, "Losing It All", for just
99 cents on Kindle. Click here to get your copy. Special sale runs from April lst to April 7th.

Marsha has been featured on Book Talk before with her action paced  “The Ups And Downs of Being Dead” about a man whose body is cryogenically frozen, but his soul is wide awake and mobile. Click on her book title and see the earlier post. Be sure not to miss her book “H10N1″ about a deadly virus that rages out of control either.

Marsha recently answered some questions about her newest book!


Tell us a little about your new book.
It’s 1984. Frank Barnes has been living on the streets of Atlanta since his release from a POW camp in Vietnam. He’s not a wino, or a crazy guy, but he just never could get his life together once he came back to the states.
Chloe Roberts grew up poor in the South, and she’s made some bad choices. Now she’s a young mother with two small children and little education to fall back on.
These two meet by chance at a local soup kitchen, and although it seems like they will strike up a friendship, fate has other plans. Evidently, they haven’t lost everything yet, and they won’t meet up again until they have.

Why is the story set in 1984?
I guess the most obvious reason is because Frank was in the Vietnam War, so I had to pick a date where he wasn’t too old. And I chose a date when he’d been on the streets long enough to know his way around.
It was fun writing about that time. Things were much simpler then: no computers, or cell phones, or video games. And it was a walk down memory lane, researching music, movies, and news events that were happening at that time.

How did you come up with the story idea?
I live in the country north of Atlanta where there are several horse farms. One day I was walking along a dirt lane, and came across an abandoned cinderblock house. It was almost completely covered in weeds and vines, the windows were broken, the front door hanging open. Inside, the bathroom was trashed, and it looked like kids had kicked holes in the drywall. But the structure itself was sound.
I think most people would find the house disgusting, but to a homeless person, having a dry roof overhead, and a place to live, would mean a lot.

So is "Losing It All" a romance?
Not really. At least not in the current context of the ‘romance’ genre. Frank isn’t rich. He doesn’t have washboard abs or a chiseled chin. And he certainly isn’t the CEO of a corporation or a Black Ops soldier or a randy cowboy on a dude ranch.
Chloe has two small children, she isn’t a blonde bombshell, and she’s very insecure. Not the formula you usually associate with romance novels. These two are just trying to fight their way through life.

How does this book differ from your first two books?
"H10 N1" is pretty much a non-stop adventure for the two main characters, - Rick and Taeya -  who are trying to find a safe haven after a flu pandemic has wiped out much of the world’s population. It’s considered a present-day thriller.
"The Ups and Downs of Being Dead" starts in the present, but it continues into the future. The main character has been cryonically-frozen, and must wait to be thawed out. The story is about his interaction with other ghosts, some who are also waiting to come back, and some who are not.
"Losing It All" is the first time I’ve gone back to the past to tell a story.
All of my books are similar in some ways though. Each story deals with how human beings react to situations, and how they interact with each other. And in each of the books, just when things look bleak, I like to add some humor to relieve the tension.

Where can readers find "Losing It All"?
It’s on Amazon, both in paperback and Kindle versions. The easiest way to find all my books is on my Amazon author’s page. You can also read more about my books on my website

You can find out more about Marsha Cornelius from her first interview on June 3, 2012. 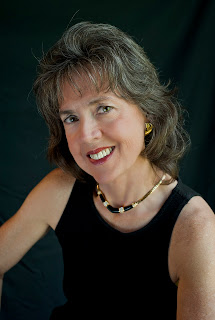 After 15 years as an elementary school cafeteria manager, Cornelius has quit her day job and now writes full time at home. That is, when she’s not posting on Twitter or sharing jokes on Facebook or chatting with other readers on Goodreads.
She has even been known to wipe a Swiffer over furniture surfaces and declare her home clean.
Her two grown sons lead their own lives, while her husband competes with two mollycoddled cats for affection.

Enjoy a few excerpts from the book!
CHAPTER ONE EXCERPT
Pain’s a bitch.
The doctor at the VA called it phantom pain, nerve trauma that would eventually go away. Yeah, right. Frank was twelve years and counting.
This morning, he woke to a cold, sluggish fog that had his foot throbbing before he even stood. His only relief was to shift his weight to his toes and keep pressure off the heel. Of course, the gimp-walk didn’t do much for his appearance. People already shied away from his long hair and shaggy beard. The shuffling limp and tortured expression convinced onlookers that he was a derelict.
They should have seen him twelve years ago at the VA. The pain was so intense all he could do was lie in bed, groaning and thrashing, his hospital gown soaked in sweat. Once he was up and around, he’d rolled down the hallway in his wheelchair, ranting at other Vietnam veterans with missing legs and arms. His rage seemed to ease his pain, but like a drug, he needed more. So he started ramming into other wheelchairs, then chasing after those who could walk, bruising their ankles with his metal foot-plates.
On his feet, Frank was a regular fighting machine, wielding a crutch like a club, or throwing sucker punches when least expected. It never occurred to him that those guys were battling their own pain.
In desperation, he pinned a doctor to the wall with his own clipboard, threatening to decapitate him if he didn’t up Frank’s morphine dosage. An orderly put him out on the street.
Then the pain really took hold. The dribble of morphine still in his system wore off while he slouched in the back of a city bus headed for downtown Atlanta. When he threw up in the aisle, the driver tossed him off. Unable to stand, much less walk, Frank crawled into an alleyway and passed out.
A wino rummaging through a trashcan woke him. Frank offered the bum some dough for his bottle of Thunderbird, and slugged the wine down in one long gulp. From there it was all downhill.

CHAPTER TWO EXCERPT
Clutching a metal cash box, Chloe slipped into her checkout lane at Foodtown, a pitiful excuse for a grocery store, with rusty stains on the floor tiles, and the rancid odor of old meat. She slid the box into her drawer and turned on the light.
In the next lane over, Jennifer popped her gum as she swiped food items across her scanner. “You’re late again.”
“Sorry.” Chloe gave a weak smile. Just because she worked in a rundown part of town didn’t mean she shouldn’t look her best. It took time to find just the right shade of eyeshadow to coordinate with her lavender blouse from K-Mart. Chloe wasn’t the type to just smear a quick coat of lipstick on her mouth. She outlined her lips with a deeper shade, like she’d seen in the magazines. And after what she had paid to get her hair colored, she wanted to make sure it was teased and sprayed to look just like Lucy Ewing on Dallas.
Jennifer’s Foodtown smock was unbuttoned enough to show a peek of the red bra she wore. Chloe bristled as a construction worker buying a sub sandwich and a quart of beer bent in for a closer look. His hands were filthy. Was he going to wash those hands before he ate?
Puffing out her chest, Jennifer grinned at him! Sure, Duane loved to see Chloe dressed in short skirts and low-cut blouses. But not the whole world.
Once the construction worker left, Jennifer leaned against her register, and dug something out of her teeth with a polished fingernail. “So, what’s your excuse today?”
Chloe reached under the counter for a bottle of glass cleaner and spritzed her scanner. “You know how my niece Staci has been babysitting for me?  Well, she was late because she had to stay after school to meet with a teacher.”
“Yeah, right.” Jennifer snorted a laugh. “You believe anything, Chloe. That’s why you’re in deep shit.”
Chloe glared at her. “I do not.”
“Right. Your husband took off, and you think he’s looking for a better job in Chattanooga.”
“He is!” Chloe felt the heat rising up her neck. “He should be back any day now.”
“Back my ass.” Jennifer’s glossy red lips curled into a sneer. “It’s been three months.”
“He’s training for a career,” Chloe repeated what she had been told. “Not just a job.”
Jennifer wasn’t buying it. “Wake up. He hasn’t even called you. And as close as Chattanooga is, surely he could get away to come home some weekend.”
Chloe’s bottom lip quivered as she swirled her paper towel over the glass.

Remember, this week on Kindle for only 99 Cents!