Marsha (M.R.) Cornelius "The Ups and Downs of Being Dead" 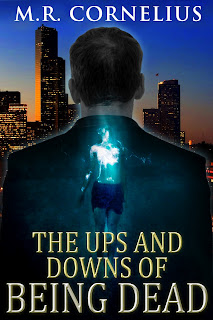 My latest book, The Ups and Downs of Being Dead, is about 57 year-old Robert Malone who finds out he is dying. Instead of accepting his fate, he decides to have himself cryonically preserved. He knows it’s a gamble. He’ll be frozen, and his body placed in a tank for the next 100 years until technology discovers a way to thaw him out.

The twist to the story is that Robert thinks he will remain in a dreamless sleep and just wake up in the future.  But like the others who were frozen before him, he is very much awake and able to come and go as he pleases. So what is a workaholic supposed to do with his time? Sure, he could go to his office, but he can’t control what happens. He can’t spend his days on the golf course because he can’t hold a club.

Robert doesn’t eat or drink or sleep. He can’t smell, or taste, or touch. So when he meets a woman also in limbo, these limitations make it very difficult to fall in love. And resolving issues with those still living are impossible. Or are they?

How did this story idea evolve?

I first read about cryonics, (also referred to as cryogenics) around the time of Ted Williams’ controversial freezing in 2002. Curious, I flew up to Michigan to get a first-hand look at a cryonics facility. No, you can’t see the frozen bodies. They aren’t in clear glass cylinders like you see in the movies; they are in stainless steel tanks called Dewars.

During my visit, I met people who have contracted to be frozen when they die, and no they are not kooks. If anything, they are a new breed of pioneer. Add to the list Larry King, who recently revealed that he will be frozen when he dies.
The more technology advances, the more feasible cryonics will become. There are already companies freezing skin, and organs. Soon the days of rushing viable organs in coolers will be gone. And that’s just the beginning of medical breakthroughs in the 21st century.

As a child, I thought everyone had running conversations going on in their heads. It wasn’t until I read comments from other writers, that I realized these aren’t just conversations, they’re stories. That’s when I began writing them down. 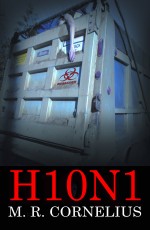 A deadly influenza virus rages out of control. There is no easy-fix vaccine. No eleventh-hour containment. Only death. With the death toll rising, there is no workforce. Crops lay unpicked and rotting in the fields; power plants are unmanned so there is no communication; police and fire departments have collapsed, so no one is safe.

When Dr. Taeya Sanchez finds herself unceremoniously dismissed from an emergency medical facility in New York, she decides to steal the hospital’s armored van for a midnight escape. Unfortunately, Rick DeAngelo, a driver for the hospital, has already stocked the van for his own getaway.

Thrown into an unfriendly alliance, these two must pick their way across the dangerous wasteland of America in search of a safe haven. And as the miles roll by, they discover that the living should be feared much more than the festering corpses out there.

Learn more about Marsha Cornelius and her books. Visit her website and read her favorite rat story!
Posted by Barbara Barth at 10:07 PM