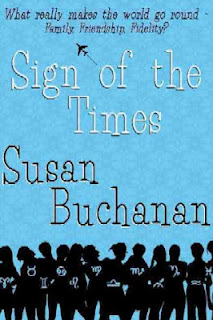 Sagittarius - Holly, a travel writer, visits Tuscany to research her next book. Seeking help when her car breaks down, she gets more than assistance when Dario, a vineyard owner, puts temptation in her path. Disappearing without explanation, he proves elusive. Bruised, Holly tries to put it behind her until a chance encounter brings her feelings to the surface again.

Capricorn – Holly’s fiancé, Tom misses her while she is in Italy and turns to an internet chat room for solace. His construction business is under threat, but could foul play be at work?

Gemini - Holly’s sister, Lucy, a serial man-eater finally meets her match, which puts her long-term relationship and career in jeopardy. Cheating she discovers, can have devastating consequences.

Libra - Holly’s uncle Jack, an eminent prosecutor, juggles a difficult teenage son with his high profile career and finds himself lacking. When his son’s school work starts slipping, he decides he needs to take control, but it’s not long before the balls all come tumbling down and Jack finds his family on the wrong side of the law.

One event binds them all…


I have been writing since I was very young, but really got into Creative Writing properly when I was about 11. I started writing my unfinished ‘masterpiece’, Adolescent Fun around that time. I am sure I would laugh my head off if I read it now! I still have it somewhere.
Over the years, whenever I went on holiday, I would keep a travel journal and also write stories. I tried to write short stories, but they were always too long! The first draft of my debut novel, Sign of the Times was 300K words! Yes, really! There was, however, a reason for that, because given the nature of the story, there were twelve main characters.
In my early twenties I started to write a few novels, which I later abandoned.  Then one day, the germ of an idea for Sign of the Times appeared.  Twelve signs of the zodiac, with the personalities for each sign represented by a different character – I knew I was on to a winner.
Back then, I was still working full-time, plus doing lots of overtime and a nightmare commute. The only time I had to write was when I was on holiday. I never had any days off where I wasn’t in a different country, except weekends and those were kept for family and friends. Working as much as I was, occasionally going to the gym and having dinner took up my weeknights. I had always told myself if I had X amount of money in the bank, I would give up work for a year to write.  Prior to this I had only written half of Sign of the Times in five years. In December 2007 I took that year off. By May 2008 the first draft was finished and by October the manuscript was doing the rounds of agents and publishers. I had, in all, re-drafted the book ten times. This was mainly to bring it down to an acceptable word count for the publishers, who wouldn’t look at anything from an unknown author of more than 120K words. If only I had known that before. But, I remember being told years ago, ‘just write’ and that’s what I had done and I hadn’t stopped!
Looking back I should have submitted Sign of the Times as it is now. The book now has around 60 chapters, whereas originally it had 13 – 12 character chapters and 1 to tie them all together. It cost me a fortune in postage!  Many publishers ask for the first 3 chapters, so for me that meant 100 pages of A4!
In November 2008, I went back to work and soon became embroiled in the day-to-day rat race again. In Feb 2012, my time in my last post finished and my other half convinced me to upload my novel to Amazon. He even went as far as creating a cover for it, although this has now been superseded by a professional cover.
Initially, nothing much happened, apart from sales to friends and family and the occasional Twitter follower. Mid-May I did the Amazon KDP Select free promo. I worked my butt off and put in three 19 hour days. On the third day, Sign of the Times hit the no.1 spot. Yippee! Since then I’ve had regular sales, although they could always be higher!
The lovely comments from readers made me dust off The Dating Game and continue writing it. It should be out October this year. Demands from readers, for a sequel to the stand-alone Sign of the Times, have made me have a re-think and there will be now be a sequel, due late 2013. So far there are six more books planned and the ideas just keeping coming! One thing is for sure, I will never stop writing again.


Buy on Amazon US


Twelve people, twelve signs of the zodiac, twelve different stories gathered in one.
Posted by Barbara Barth at 9:38 PM