Gerald Gillis "Shall Never See So Much"

George Orwell wrote in his 1946 essay, Why I Write: "All writers are vain, selfish, and lazy, and at the very bottom of their motives there lies a mystery. Writing a book is a horrible, exhausting struggle, like a long bout of some painful illness. One would never undertake such a thing if one were not driven on by some demon whom one can neither resist nor understand."

A lot of effort goes into writing a book, enormous amounts of time and energy. There are times of great excitement and moments of suffocating doubt. There is hope and promise and turn-the-page anticipation when creating something in the sweet glow of afternoon where nothing existed in the early calm of morning. There is also the opportunity to gauge the thickness of one's skin and the stoutness of one's heart if rejection comes knocking, at once marginalizing and discouraging, as if the very demon of Orwell's essay is laughing hysterically at the folly of such an undertaking.

I wrote my novel Shall Never See So Much to chronicle the affects of a divisive war upon a typical American family, and the deep strains it brought upon its members. I settled upon the cataclysmic year 1968 to provide a setting that I thought would be interesting and instructive. I chose a Marine brother and his anti-war sister through whom I would tell the story.

My story in Shall Never See So Much involves the bravery of my characters in their respective times of turmoil and danger. The point of my book is my belief that the human spirit is fundamentally heroic. I believe it because I've studied history. I believe it because I served in the Marine Corps with a great many heroes of the first order. I believe it because I've seen it in the lives of everyday people, like my grandmother and my parents. I still see it, in my wife and kids, and now I'm starting to see it in my grandkids. They're heroes to me, real heroes, and they inspire me by their example. Shall Never See So Much is about American heroes who took a stand and did their best in what they thought was right for the nation. 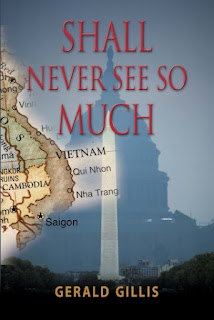 "Shall Never See So Much is an incredible story of family, war and the love of country that held our nation together."  By Military Writers Society of America

Shall Never See So Much has been awarded a Gold Medal by the Military Writers Society of America and a Bronze Medal by Readers Favorite, both for its historical fiction category.

Visit the author's website and blog. Buy the book on Amazon.

Posted by Barbara Barth at 7:08 AM