Visit the authors website. Book signing this Saturday in Gainesville.
Link here for details.
﻿
﻿
My name is Shane Etter, and my first novel, Bottom Dwellers, was published in April of 2011 by Black Rose Writing, a Texas-based small press (www.blackrosewriting.com).  Bottom Dwellers is a supernatural thriller about green mutant people with gills living on the bottom of one of the largest manmade lakes in the U.S., in north Georgia.  It’s the first of what I anticipate being a series of books to follow with the Dwellers theme of a worldwide mutant community. 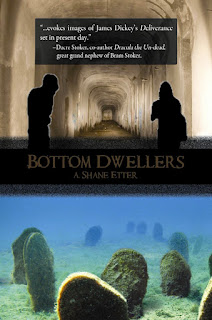 While scuba diving in Lake Lanier, Patrick Dylan encounters a lost community of green people with gills who have been living on the bottom of the lake since being built in the early 1950s.  Mutants due to radiation leakage from the Georgia Nuclear Laboratory, built in Dawson Forest, around the same time as the lake, the have survived, quietly and until this time with no one discovering them.

Despite their warnings to Patrick to stay away and not return, he does come back and a battle with an evil element of the bottom dwellers ensues.  It’s also during this time he that he meets a beautiful Lake Lanier park ranger, Trudy Price.  They start dating, quickly get engaged and marry.  While on their honeymoon in NYC, they get involved in a murder investigation that leads them into the abandoned subway tunnels under the city, where they encounter the mole people of New York.  A different kind of bottom dweller and a different struggle ensues.

Bottom Dwellers may be purchased at Amazon and Barnes & Noble.

Shane started writing after suffering a stroke at fifty years old and during his recovery period a brain shift occurred causing him to become creative virtually overnight.

Shane likes creepy books, and he is pictured with one of his favorite bestselling authors, John Connolly. 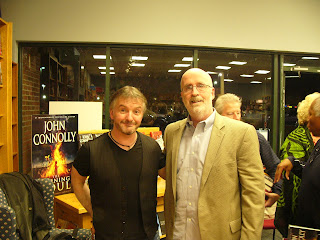 Shane makes his home in north Georgia, where he is currently working on the next Patrick Dylan and Trudy Price adventure and where he lives with his wife, Ellen, and their two standard poodles, Hawk and Pearl. He is the president of his own small high technology company and collects books and wine and enjoys working out in his spare time.

What they are saying about the book: Shane has crafted a great first book! He has written a fast paced story that allows you to suspend disbelief and enjoy the story!

Posted by Barbara Barth at 9:34 PM